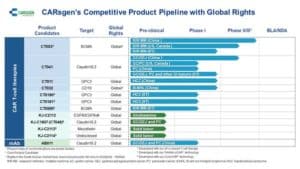 CT053: completed enrollment for pivotal Phase II trial in China, with plan to submit the NDA to the NMPA in the third quarter of 2022 CT041: initiated a confirmatory Phase II clinical trial in China CT041: was granted RMAT by the FDA CT041: data from a China Investigator-Initiated Trial was published in Nature Medicine Continuous development of innovative CAR T technologies to empower the next generation pipeline products U.S. CGMP manufacturing facility began operations, with plan to support clinical trials in North America from second half 2022 Appointed CARsgen CMO and CARsgen US President

Dr. Zonghai Li, Chairman of the Board, Chief Executive Officer, and Chief Scientific Officer of CARsgen Therapeutics Holdings Limited, said that “In the first half of 2022, CARsgen has made significant progresses in advancing our technology innovations, product pipeline, and business operations in the U.S. and China, despite the impact of the COVID-19 pandemic. CT041 has become the world’s first and the only CAR T-cell candidate for the treatment of solid tumors entering a confirmatory Phase II clinical trial. For CT053, we plan to submit the NDA to the NMPA in the third quarter of 2022. Our U.S. CGMP manufacturing facility has also started operations. We continue to dedicate ourselves to advancing innovative CAR T technologies to address the major challenges of the industry. We have also established in-house, vertically integrated manufacturing capabilities. Driven by the vision of Making Cancer Curable, we expect to bring innovative and differentiated cell therapy to cancer patients around the world as soon as possible, creating value for investors and the public.”

CT053 is an upgraded fully human, autologous BCMA CAR T-cell product candidate for the treatment of R/R MM. It incorporates a CAR construct with a fully human BCMA-specific single-chain variable fragment (scFv) with lower immunogenicity and increased stability, which overcomes the challenge of T-cell exhaustion by reducing the self-activation of CAR T cells in the absence of tumor-associated targets.

CARsgen has completed the patient enrollment of the pivotal Phase II trial patients in China (LUMMICAR STUDY 1) and plans to submit the NDA to the NMPA in the third quarter of 2022. CARsgen is conducting the pivotal Phase 2 trial in North America (LUMMICAR STUDY 2), and the Company plans to submit the BLA to the U.S. FDA in the end of 2023. The Company also plans to conduct additional clinical trials to develop CT053 as an earlier line of treatment for multiple myeloma.

An update from the China investigator-initiated trials (IITs) was published in Haematologica in 2022.

CT041 is an autologous CAR T-cell product candidate against the protein Claudin18.2 (CLDN18.2) and has the potential to be first-in-class globally. CT041 targets the treatment of CLDN18.2-positive solid tumors with a primary focus on GC/GEJ and PC. CARsgen was the first in the world to successfully identify, validate and report CLDN18.2 as a solid tumor-associated antigen and viable target for CAR T-cell therapy for solid tumors in which CLDN18.2 is prevalently or highly expressed.

As of the date of the announcement, CT041 is the world’s first and the only CAR T-cell candidate for the treatment of solid tumors entering a confirmatory Phase II clinical trial.

Updates from the Phase 1b study in the U.S. (NCT04404595) and the Phase Ib/II study in China (NCT04581473) were provided in poster presentations at the 2022 American Society of Clinical Oncology (ASCO) Annual Meeting in June 2022. An update from a China IIT was published in Nature Medicine in May 2022, which is the largest clinical trial for CAR T-cell therapy in solid tumors to date.

AB011 is a humanized monoclonal antibody product candidate against CLDN18.2 for the treatment of CLDN18.2-positive solid tumors. The company obtained the second investigational new drug (IND) clearance in the world for a mAb targeting CLDN18.2.

CARsgen has completed Phase I monotherapy cohort enrollment and initiated a trial for combination with chemotherapy.

（1）    Efficacy: To enhance efficacy against solid tumors, CARsgen continues to develop next generation CAR T technologies, such as CycloCAR®. CycloCAR® features the co-expression of cytokine IL-7 and chemokine CCL21 in CAR T cells to potentially improve clinical efficacy and reduce the requirement of lymphodepletion conditioning.

（2）    Safety: To improve the applicability of adoptive cell therapies, CARsgen developed the sFv-ε-based T-cell therapy powered by a full T-cell receptor (TCR) complex comprising a GPC3-targeted scFv and a CD3ε subunit, which can form a functional TCR complex with other TCR subunits and redirect T cells to kill tumor cells in an MHC-independent manner.

These technologies are currently being developed in-house with global rights and can be used alone or in combination to upgrade CARsgen’s existing product candidates and to generate future pipeline product candidates.

As of June 30, 2022, CARsgen had more than 300 patents of which 70 patents had been issued globally including China, the United States, Europe, and Japan. This is an increase of 7 issued patents and 21 patent applications from the end of 2021.

As of June 30, 2022, CARsgen had a total of 601 employees. The company has also strengthened the leadership team: CARsgen hired Dr. Raffaele Baffa as the Chief Medical Officer of the Company, and Mr. Richard Daly as the President of CARsgen Therapeutics Corporation. Biographical details of the senior management team are provided on the company’s website at www.CARsgen.com.

CARsgen is a biopharmaceutical company with operations in China and the U.S. and is focused on innovative CAR T-cell therapies for the treatment of hematologic malignancies and solid tumors. The Company has built an integrated cell therapy platform with in-house capabilities that span target discovery, antibody development, clinical trials, and commercial-scale manufacturing. CARsgen has internally developed novel technologies and a product pipeline with global rights to address major challenges of CAR T-cell therapies, such as improving the safety profile, enhancing the efficacy in treating solid tumors and reducing treatment costs. The Company’s vision is to become a global biopharmaceutical leader that brings innovative and differentiated cell therapies to cancer patients worldwide and makes cancer curable.