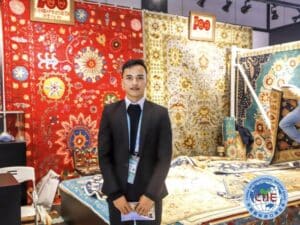 
An exhibitor stands in front of the handmade wool carpets displayed at the fourth China International Import Expo held in Shanghai from Nov 5-10, 2021

The CIIE, which was launched in 2018, comprises a business exhibition, a country exhibition and the Hongqiao International Economic Forum.

The fifth edition of the CIIE will be held in Shanghai from Nov 5 to10 this year as scheduled. As usual, a slew of companies will be attending the expo for the first time – they include global metals and mining giant Rio Tinto Group and Japanese multinational semiconductor company Renesas Electronics Corp.

The CIIE has become the preferred place for companies to announce new creations. During the past four editions, exhibitors have debuted more than 1,500 new products, technologies and services.

The CIIE has further opened up the huge Chinese market and made a profound difference in the world, especially in least developed countries, those in Central and Eastern Europe and those involved in the BRI.

Mamani, for example, an alpaca craftsman from Peru, used to make a living by selling alpaca artworks at his roadside stall, earning less than $20 a day. Because of the CIIE, orders from China now generate a monthly income of $50,000 for him, and stable jobs for another 200 or more craftsmen just like him. “Without the orders from China, many craftsmen like me will be unemployed,” he said.

In the fourth CIIE, many products from Trinidad and Tobago have attracted Chinese consumers’ attention. “We are expecting to attend the fifth CIIE this year to exhibit our special goods,” said Analisa Low, who assumed her post as the ambassador of Trinidad and Tobago to China, in a recent interview.

In addition, a series of sideline events such as promotional activities in foreign countries, signing ceremonies and forums, have made the CIIE more than just a six-day expo, but also a means to turn exhibitors into investors.

Be sure to browse the official website of the CIIE for more information about the upcoming fifth edition: https://www.ciie.org/zbh/en/.