Who is Hussain: World Record Smashed as British Charity Recruits over 37,000 Blood Donors On Single Day 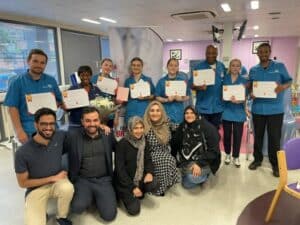 World record broken for the most blood donations in one calendar day, across 27 countries in over 350 venues worldwide. 37,018 blood donations made in this record-breaking campaign could save over 110,000 lives. The Global Blood Heroes campaign was coordinated by the social justice organisation Who is Hussain in partnership with local and national blood donor organisations, including the Red Cross, UK’s NHS Blood & Transplant, America’s Blood Centers and many more. This campaign and world record come when there is an acute need for blood and shortages in many countries.

LONDON, Sept. 19, 2022 /PRNewswire/ — Today, social justice charity, Who is Hussain, has announced that they have broken the world record for the largest blood drive in history.


Medical staff and Who is Hussain volunteers in London, UK

Officially confirmed today, Who is Hussain coordinated the record-breaking #GlobalBloodHeroes campaign on the 27th of August 2022, which saw thousands of people across 27 countries donate blood on a single day. Volunteers in New Zealand kicked off the blood drive as the day began and the final donations came in from the West Coast of USA.

Authenticated by the Official World Records, the total number of blood donations was 37,018, beating the previous record of 34,723 set in 2020. With up to 3 lives saved per donation, over 110,000 lives could be saved by the charity’s efforts.

Muntazir Rai, Director of Who is Hussain, said: “Who is Hussain was founded just over a decade ago, inspired by the compassionate legacy of Hussain ibn Ali. It’s incredible to think that the selfless altruism of this man, who lived over a thousand years ago, has inspired over 37,000 people to participate in the biggest blood drive in history.

“The pandemic hit blood reserves across the world hard. With hospitals struggling to meet demands, Who is Hussain volunteers rallied together and launched our Global Blood Heroes campaign. Donating blood is a universal act of compassion that can unite people all around the world – we all bleed the same. We’re so excited that so many first-time donors came forward and many have committed to donating again, and will continue to, hopefully, for years to come.”

The Global Blood Heroes campaign saw large numbers of first-time donors take part; with 50% of donations in Canada and 25% in the UK coming from those giving blood for the very first time.